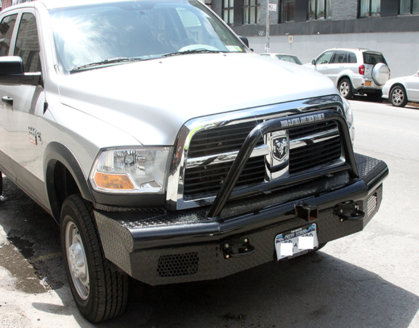 The Outlaw Pipe Bullnose front replacement is built for those who want a non-custom style functionality.  This bumper offers thick 1/2" plate steel mounting brackets bolted to existing bolt holes in the frame...   It comes standard with a 2" receiver, fog light holes and the bull bar for added grille protection.  It has a "front porch" style deck which allows ample walking room when working on the engine.

The Apache Bullnose Replacement Bumper is built for the most discriminating truck enthusiast.  It is almost endlessly customizable and serves as a  heavy duty replacement for your factory bumper.  The man hours spent constructing the Apache bumper in the Tough Country state of the art machine shop are focused solely on producing a product that can stand the test of time during on and off road abuse.  The bumper comes standard with the grille euro bar and the finish is powdercoat glossy black.
Price: $1,395
Available Options: (click here for more information) 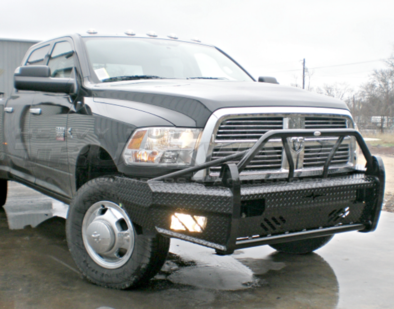 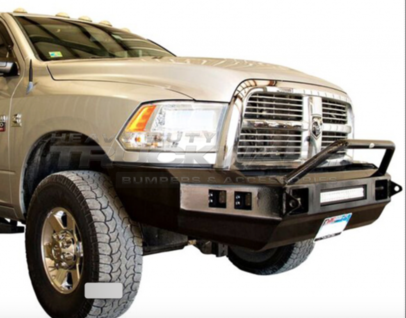 2010-2018 Dodge Ram 2500/3500/4500/5500​
Built with fully welded plate steel and finished with a durable black textured finish, Hammerhead bumpers were born with a backbone of quality. The Hammerhead is 100% made in the U.S.A. of top quality materials and undergo rigorous QC and weld quality standards throughout the production process. This bumper has it all. Standard features include: winch ready (up to 16,500 lb Warn, not including PowerPlant), off road light compatible, Shackle Mounts welded on front and back of bumper extending to the frame. The Hammerhead bumper is designed to be winch capable and stand up to the punishment of on-road and off-road driving. They are made with 3/16" thick plate steel and are reinforced to allow for extra strength. The shackle mounts are a part of the mounting surface to the frame, extending through the bumper and are welded on the inside and outside of the bumper. Approx 215 lbs.
Price: $1,916 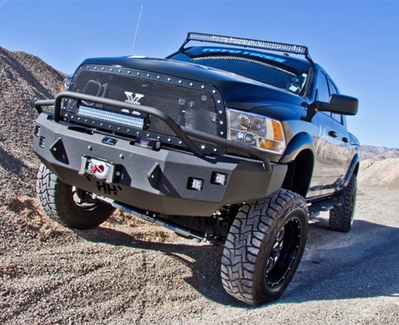 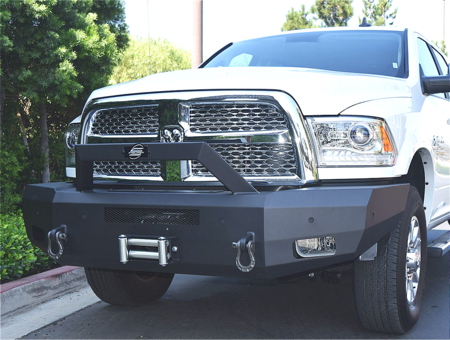 Flat plate design offers Sleek Lines To Match Truck Contour. The Bull bar in front of the grille is standard. Accommodates Factory Tow Hooks And Fog Lights. Accommodates License Plate. Snug Fit To The Front Of The Vehicle. No Drill Installation. Heavy Duty Mounting System Designed For Rugged On And Off Road Use. Eliminates Excessive Wear On Suspension. Light up the night with the available LED light bar slot built into the center of the bumper and four additional slots for cube LED lights. Designed to accommodate a 20" Rigid Industries LED Light bar in the center (Price does not include LED lights). *Does not retain front sensors on '16-'18 models) 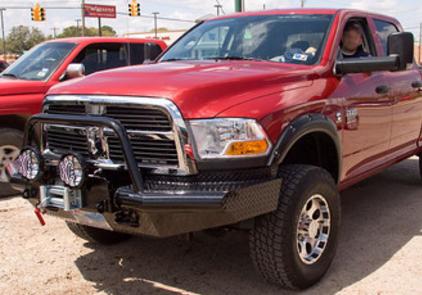 2010-2016 Dodge Ram 2500/3500/4500/5500
The Diamond Steel Bullnose Replacement Bullnose Bumpers are built on the premise that you can have both form and functionality, in the same bumper.  Constructed with thick 11 gauge diamond plated steel and accomodating the factory fog lights and tow hooks, these bumpers withstand off road abuse as well as head turning looks while on the pavement.  They come standard in a thick glossy powdercoat black but many customers have them custom painted to match their truck. Approx: 140 lbs.