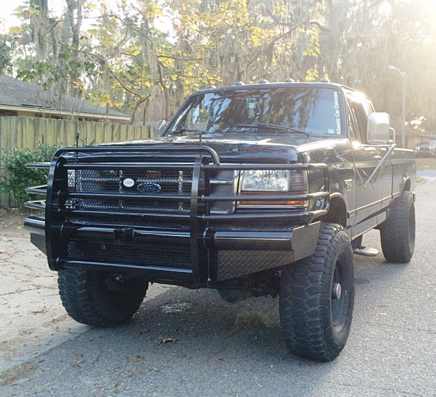 Built with fully welded plate steel and finished with a durable black textured finish, Hammerhead bumpers were born with a backbone of quality.  IF YOUR TRUCK HAS LEAF SPRINGS PLEASE LET US KNOW UPON ORDERING.  Hammerhead bumpers are 100% made in the U.S.A. of top quality 3/16" reinforced plate steel. The shackle mounts, welded front and back, are an extension of the frame mounted brackets to offer maximum strength when you need it most.  This bumper has it all. Standard features include: winch ready (up to 16,500 lb Warn), 'built-in' off road light compatible (up to 6"), shackle mounts. Weight: Approx 205 lbs
Price: $2,393
Part #: 700-56-0067 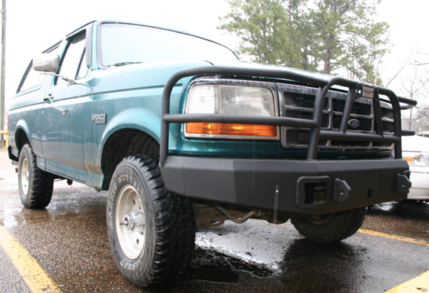 Welded steel construction offering plenty of rigidity for the back roads. These are the same bumpers installed on oil field and natural gas pipeline trucks year after year.  They are made to take a beating and keep going. Customers tell us the only thing with body damage is the roadkill they leave behind.  Not having to deal with the insurance company is priceless.  Mounted directly to the truck frame.  All necessary mounting hardware included.  This bumper comes standard with the 2" receiver. ***IMPORTANT note regarding the winch mount version of this bumper.  We have discovered that some of the OBS Ford frames are slightly longer than others from the factory.  This typically accounts for approximately 1 in 7 trucks.  The longer frame makes contact with the back side of the winch plate.  This may result in needing to trim the winch plate or the front of the frame horn.
Price: $1,095
Item #: GFSD92101
Available Accessories:
Winch Mount: $190 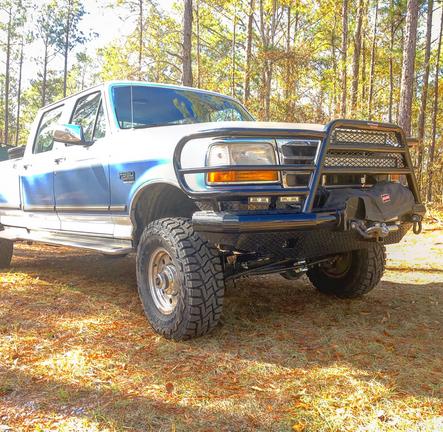 The Deluxe is like no other bumper on the market, with a rigid pipe base that wraps back to the fender-well, tubular steel grille and light guards, and most impressive, it's sprayed with anti-rust primer base coat before powdercoating.  It has a streamlined appearance, and comes standard with a high gloss black industrial powder coat that will compliment and strengthen the look of your vehicle. The Deluxe is built with 1¼" light loops (larger than industry standard) and angled front diamond plated steel protection plates for increased ground clearance.

ALL Necessary Hardware Included - Welded construction ready to bolt to the frame of your truck!