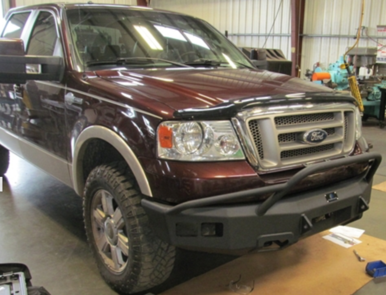 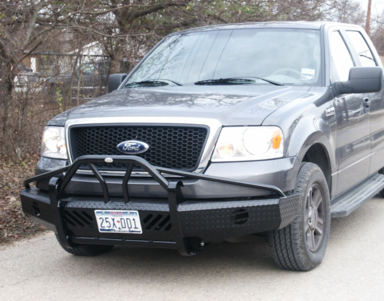 ​The Diamond Steel Bullnose Replacement Bullnose Bumpers are built on the premise that you can have both form and functionality, in the same bumper.  Constructed with 11 gauge diamond plated steel and accomodating the factory fog lights and tow hooks, these bumpers withstand off road abuse as well as head turning looks while on the pavement.  They come standard in a thick glossy powdercoat black but many customers have them custom painted to match their truck. The 04-05 F150 will accommodate the rectangle shaped factory fog lights. The 06-08 will accommodate the round fog lights.
Price: $1,095
Part #: 600-10-6005 (2006-2008 F150)

Hammerhead's front bumpers are designed to be winch capable and stand up to the punishment of on-road and off-road driving. This front bumper accommodates up to four 3.25" x 3.25" external dimension cube after-market off-road fog lights. They are made with 3/16" thick plate steel and are reinforced to allow for extra strength while keeping the bumpers as light as possible. The shackle mounts are a part of the mounting surface to the frame, extending through the bumper and are welded on the inside and outside of the bumper. The pre-runner style brushguard is made with 1.75" x 0.120" wall tubing.
Price: $1,916