2004-2008 F150
Important Note:  The 04-05 F150 will accommodate the rectangle shaped factory fog lights. The 06-08 will accommodate the round fog lights.  Built with fully welded, thick 11 gauge diamond plated steel and tubular steel pipe to meet both the needs of farmers wanting to keep cows from crushing the plastic in their grille during feeding as well as those wanting to turn heads driving through the city.  This bumper sits closer to the body of the truck than most other "pipe" bumpers.  The contour of the bumper compliments the lines of the grille and headlights to keep the front of your truck from looking too beefy.   Many customers feel the fit and look is so good that they have it custom painted to match the color of their truck.  This bumper will allow you to retain use of your factory tow hooks and fog lights.  It comes with all necessary hardware for mounting directly to the frame of the truck, no drilling required.  (Approx. 170 lbs.)
Price: $1,295
Item#: 300-10-4005  (2004-2005 F150)
Item#: 300-10-6005 (2006-2008 F150)​

ALL Necessary Hardware Included - Welded construction ready to bolt to the frame of your truck! 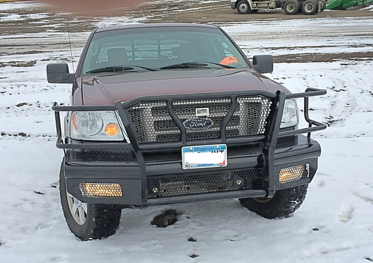 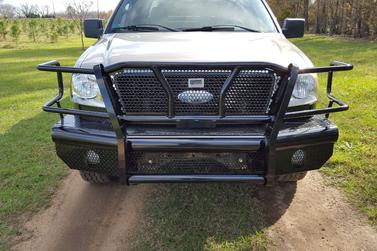 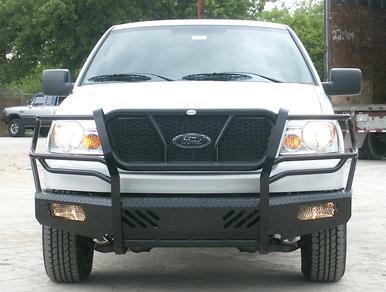 2004-2008 F150
Welded steel construction featuring schedule 40, 4" center pipe. This bumper DOES replace the flimsy plastic pieces under the headlights.  These are the same bumpers that we install on oil field and natural gas pipeline trucks year after year.  They are made to take a beating and keep going. Customers tell us the only thing with body damage is the roadkill they leave behind.  Not having to deal with the insurance company is priceless.  Mounted directly to the truck frame.  All necessary mounting hardware included.  No Drilling Required. The 2004-2005 will have rectangle fog light mounts and the 2006-2008 will have round fog light mounts.  (Approx 215 lbs.)
Price: $1,195
Item #: OSF04101
Available Accessories:
2" Receiver - $95